Irfan Zuberi: Where did dhrupad originate from?

Ustad Rahim Fahimuddin Khan Dagar: In the beginning, there were four forms – chhanda, prabandha, dhruva and matha. The remnants of these ancient forms are not to be seen in this day and age anymore. These then gave way to four styles – dhadhoo roop, miras roop, vant roop and jog roop which might still be in existence. All of this was part of a gradual development of music. These styles gave way to the four prominent stylistic affiliations or banis – dagar bani, khandar bani, nauhar bani and gauhar bani. This period would be roughly around the 12th century. The development and continuous additions and modifications to music were made by legendary sages like Nayak Gopal, Nayak Baiju and others. Among those who gave a sustained support to dhrupad was the great Maharaja Man Singh Tomar of Gwalior.

However, there exist competing views and controversies regarding who made which kind of contribution and how important a place that particular sage or master should occupy in the overall history of music. Some people say that Nayak Baiju had a competition with Swami Haridas Dagur but according to our family history, Nayak Baiju and Nayak Gopal lived during the Khilji dynasty whereas Swami Haridas Dagur lived during Akbar’s reign. An esteemed friend of my father’s and a great scholar Acharya Brahaspati once told me that he did a lot of research to come to the conclusion that Tansen was actually a Hindu. I congratulated him on his finding but wondered how it makes any difference to music in general and dhrupad in particular as both Muslims and Hindus have contributed immensely to music!

There is one important that people should know – there existed two individuals in the history of music both of which shared the name Swami Haridas but our ancestor was Swami Haridas Dagur who was also the guru of Tansen. By that link, the Senia gharana people are our guru-bhais since we share the same ancestral guru.

At the end of the day, these controversies, contradictions and bones of contention do not matter as it is the mool siddhant of music which is paramount in my mind since it lives forever whereas these debates die out with people.

IZ: You keep saying that dhrupad contains the full information of Indian classical music. Please elaborate on this.

Ust.RFD: As our great forefather Baba Behram Khan Dagar said, dhrupad is “ragatmak swaratmak, shabdatmak varnatmak, talatmak layatmak and rasatmak“. It is due to these simple but deep reasons that dhrupad is both kalatmak and primarily vidyatmak. Practitioners of dhrupad also require an in-depth knowledge of nada yoga. So you see, dhrupad is an educational subject which is both theory and practice at once!

Ust.RFD: Think of the Vedas as vidhi and sahitya or information. Then, the upveda can be thought of as kriya or the practical form of the Vedas which is sangeet. There are four broad chapters within sangeet – prakaran adhyaya, vadya adhyaya, nritya adhyaya and taal adhyaya.

What can be called the mool mantra or the formula of the prakaran adhyaya is the following:

All of these are practical things and I love to demonstrate these things for the young of the country because it is on their shoulders now that this rich tradition rests. It is only if we light a candle today that more candles will get lit by themselves in the future. At the same time, these are things which are absolutely essential for musicians to know for music cannot be presented effectively and comprehensively without the detailed knowledge of these things.

There is a wonderful chautaal (12 beat cycle) composition by Bilas Baras Sen (elder son of Miyan Tansen) in Raga Miyan ki Todi which is self-explanatory:

IZ: I have found that you are very interested in reading about other religions and poetry. Do share this interest of yours with us.

Ust.RFD: I have always been interested in gaining more and more knowledge! Things which are put simply but have an inherent depth in them attract me towards themselves. All the literature which has within itself the search for the essence of the Almighty interests me. I like the works of Maharishi Valamiki, Maulana Jalaluddin Rumi, Kabirdas, Tulsidas, Zauq, Mirza Ghalib, Mir, Momin and Dagh. They have all said things which seem so simple but when pondered upon, they open the doors to wisdom and deep insight. I give you a couple of examples:

It is the things which make me go “aah” rather than “wah” which attract me most as the former is the voice from within the depth of the soul whereas the latter is merely a vocal appreciation.

IZ: Fahim saheb, please tell us about your initiation into dhrupad and about your long years of training and riyaaz.

In accordance with our family’s tradition, I was asked to sit along with the elders of the family from the time I was five years old to observe if I had any capability and thirst for learning. From the time I was ten till I was fourteen years of age, I was asked to practice nada yoga and the 12 mool siddhant and practice playing the tanpura on the basis of which I could then be taught Ragas and compositions. These mool siddhant or fundamental principles are – (i) aakaar; (ii) gamak; (iii) lahak; (iv) dagar; (v) duran; (vi) muran; (vii) kampit; (viii) andol; (ix) isphurt; (x) soot; (xi) meend; and (xii) hudak. It should also be known that to master these fundamental principles, it takes a whole lifetime and even then one might feel anxious about one’s mastery over them! 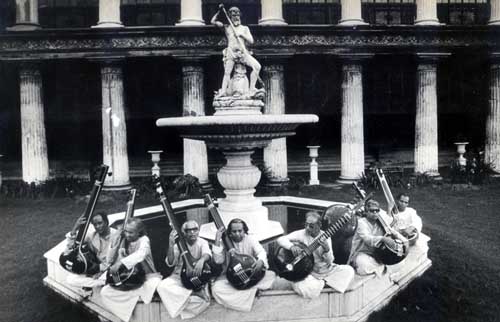 IZ: Which musicians have you liked over the years?

Ust.RFD: Ihave liked many musicians and have always made it a point to listen to other forms of music and learn from them as well as enjoy the different stylistic approaches to music. I have enjoyed the vocal music of Ustad Bade Ghulam Ali Khan, Ustad Mushtaq Hussain Khan, Ustad Altaf Hussain Khurjewale, Ustad Chand Khan and Ustad Amir Khan, the instrumental music of Ustad Vilayat Khan, Pt. Ravi Shankar and Ustad Ali Akbar Khan, the dance of Pt. Shambhu Maharaj, Pt. Birju Maharaj and Pt. Kelucharan Mohapatra, and the qawwali of Imam Baksh Qawwal.

IZ: How has your involvement with SPIC MACAY been?

Ust.RFD: I have been associated with SPIC MACAY almost since its inception in 1977 and have really enjoyed going to schools and colleges and interacting with children. After all, it is my responsibility as a pallbearer of a great Indian tradition to ensure that it sustains itself even after I am gone and I take that very seriously. It is a joy to be with children and see them try and absorb such things of depth and over the years, I have seen a visible change in their outlook and personalities!

However, some policies of SPIC MACAY need urgent revision, the most important being giving a higher artist honorarium keeping in mind the changed times and the needs of an artist as a human being with a family to support! The Gurukul scholarship scheme also needs some attention. The students sent to the gurus have to be of a good standard so that the guru is able to instill some values and teaching into them for the short period of time they are with the guru.

IZ: What do you see in the future of classical music in general and the Dagar family in particular?

Ust.RFD: In today’s day and age, I see that there is much more publicity and discussion about music. At the same time, I see a visible paucity in terms of the basic fundamental knowledge among musicians. Tradition seems to have taken a backseat and the most visible sign of it is the diminishing guru-shishya parampara. What has come to the fore is the culture of showmanship in which each artist competes with the other in order to sell himself/herself in a better way.

However, you have to remember that this classical music has survived many onslaughts and droughts of performers. Whatever has depth and tradition behind it is very strong and has a solid foundation. This is the reason that it will continue to survive and will find its practitioners along the line.

As far as the Dagar family is concerned, the young performers in the family are the representatives of the 20th generation in an unbroken chain. If they preserve the basic depth in the dagar bani which has been handed down to them and maintain their individuality, I am sure they will do well and continue to show the world what our family holds. However, they need to develop a sense of responsibility and maturity which has been the hallmark of their forefathers.

IZ: Tell us about your family life.

Ust.RFD: I was blessed with wonderful parents and had the privilege of being born in such a musically rich family. I got married on 19th November 1961 to Naheed and we are still as much in love as we were when we first met! She has been a wonderful partner and has always taken good care of me making me understand the things about life which are beyond my comprehension. We have a daughter whose name is Saba. She is blessed with three sons whose names are Yasir, Zeeshan and Faisal. They all love me a lot and each time they come to visit me, I feel young all over again and get inspired by their zest for life. I am more than satisfied with my family life and thank the Almighty for blessing me with such a loving family.

IZ: Do you have any hobbies?

Ust.RFD: I love gardening! These days, whenever I have even a little bit of free time, I like to tend to my plants. I also enjoy photography, reading and watching cricket and hockey. In terms of indoor games, I enjoy playing carom, monopoly and ludo with my grandsons. (Fahim saheb’s wife Naheed adds laughingly) “He is still crazy about patangbaazi…I have seen the itch in his hands when he sees kids flying kites even today!” .